The Voynich Manuscript: Under the Big Tent

The summer vacation took us all the way to the politics of the middle ages. Such a trip is worth the time. The collection of countries represented in the Voynich Manuscript covers what is today the European Union - minus Greece and Spain + plus Russia and China. There is eerie resemblance with the economic and political news in the last couple of years. Among most popular illustrations in the Voynich book is fol.86v . Let me introduce you to the circle of tents that may be represented in the VMS nine rosette medallion. 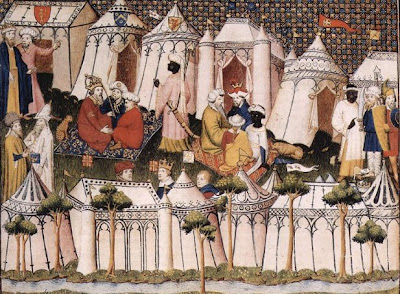 This illumination is held in Bibliothèque nationale de France. It is made by the same master that worked on Christine de Pizan’s City of the Ladies manuscript. It depicts the “Princes of the East” during the visit of the Byzantine Emperor Manuel II to Paris where he stayed at the Louvre from 1400 to 1402. The guest from Constantinople took a short visit to England, but stayed mostly in France where he dealt with the Dukes of Berry and Burgundy while the King of France was mentally unstable.

This circle of tents may have inspired the Voynich ‘medallion’. Imagine looking at those structures from above. Notice how the rectangular ones kind of ‘bridge’ with the round tents to form a canopy fortress inside which the participating Kings would discuss the matters of the world. 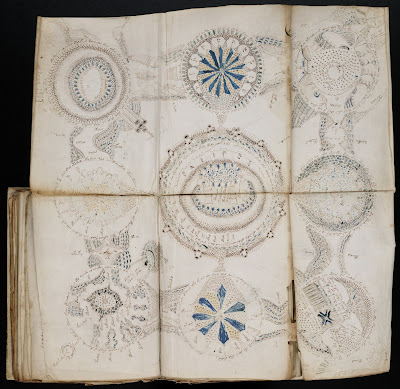 Probably the most exotic tent on the Voynich 9 rosette medallion is the one in the bottom right corner of Fol.86v. The way it walls are opened reminds of 14th century illustration, held in Staatsbibliothek zu Berlin, depicting Mongolian tent-mosque.

I wonder what were the Queens doing while the Kings were holding meetings?
Posted by Ellie Velinska at 7:22 PM 1 comment: