VMS researcher Klaus Schröer from Germany came up with possible new idea on the two big letters on the first page of the Voynich manuscript. (Take a look at his document about this here)

Based on the dictionary he used in the research I came up with more alchemy symbols in the illustrations of the VMS. 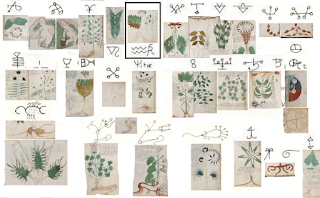 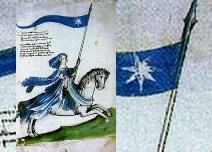 Barbara (or Barbora) is riding a horse and waving starry banner in Konrad Kyeser’s Bellifortis manuscript.

The reason I am bringing up Barbora of Celje is because the author of the Voynich Manuscript seems to be well connected inside the Hungarian and the Austrian courts according to my 'geopolitical' theory of the VMS's 'astronomical' pages (here).

Carmina Burana is manuscript with texts from 11th through 13th century, written by mischievous clerical students making fun of their bosses at the Catholic church. It is written in mixed language - Latin and old German with bits of English and French. Among the illustrations is the one of  an imaginative forest, which reminded me a lot of a plant in the Voynich manuscript. 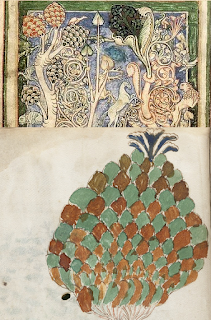 One mischievous clerical student in the 14th century was named Peter of Candia (later pope Alexander V), who started the drinking society at Greyfriars, Oxford (the same college that educated Roger Bacon). Peter of Candia may have come across the Carmina Burana's (or similar book) drinking songs.

Drinking and eating were the things that pope (anti-pope) Alexander V loved doing, according to his contemporary Theodiric of Niem, cited in Cormenin's History of the Popes. 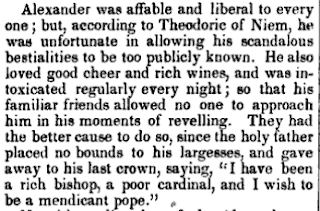 In fact Alexander V was reportedly drunk when he signed the famous bull that resulted in the burning of the Wycliff's books in Prague - action that caused whole lot of troubles for the church in the aftermath. 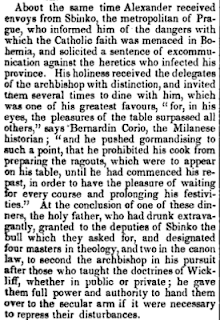 I can assume he was also drunk when he signed the bull establishing the University of Leipzig, which centuries later gave the world Karl Marx and again... whole lot of troubles...

Anyway, for the magical forest in Carmina Burana and for the unidentified plants in the Voynich Manuscript... Cheers!

The Voynich Manuscript is written from left to right. This is considered self-evident. No so much!

Imagine the author was writing from right to left while making it appear it was written from left to right. This would have caused difficulties at the last line of each paragraph so the text can be fit at the left margin.

The VMS is covered with weird paragraph endings starting with the first page. The author just couldn't make his/her mind where to place the text on the last line. I made a sample image with words appearing both on right and left (more content was left after reaching the left margin) and the text being in the center at the end of the paragraph (not making it to the left margin). 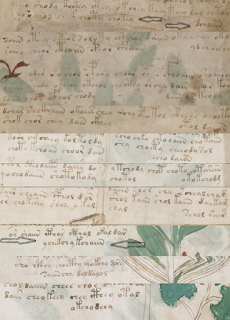 The beauty of 'right to the left' theory is that the high frequency VMS word daiin becomes niiad, which is common ending of the infinitive form of the verbs in some Slavic languages (as in Russian  по-нять).

Looking through 15th century Cyrilic texts from  Russia ( including the 15th century Kivlian Bible held in the Russian Presidential Library) I noticed that it was written without spacing between the words. So writing from right to left with random spacing would be sufficient way of encoding leading to so many possibilities that it hardly can be proven.

To demonstrate this theory I will tell you interesting Voynich manuscript story encoded on f68r and 68v (there is a bit of mix up at the Yale library - just to be sure - the image number is 1006197). 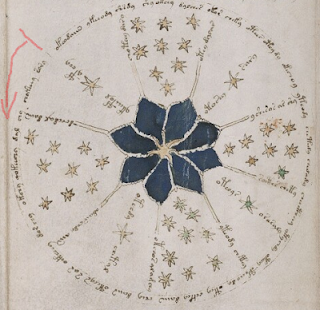 It starts at the mark and it goes counter-clockwise (as if it was written from right to left). I use my own alphabet transcription that I posted with the Karnak palace story here. So the story goes:

This produced a lot of Slavic (mostly Russian) words:

So my proposed translation is:

peas and sweet wax is what the chief gave the orphans, the customs of the spring is to take off hat whoever has hat and cover with sand so those who have sand in their hair get from the vizir (vizier) handful of sweet vegetables in the couscous which is inserted in it.

The Voynich Manuscript: the Karnak Palace

VMS researcher Don of Tallahassee asked me to demonstrate my transcription of the Voynich manuscript, so I will try to do it in this post.

My theory of the VMS cypher is that the illustrations are in fact keys to the route in the text that holds the message. To demonstrate I picked the popular 'sunflower' page f.33v 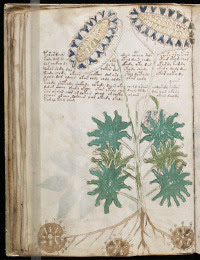 As you can see the plant has 3 roots, 3 flowers and 3 leaves on each side of the stem, so I ran simple fence cypher - I extracted every third letter of the text. That approach produced interesting story in the last few lines.

On the image I burned every third letter so it is easier for you to follow the route.

The result shows some word similar to today's Russian and what is even better - similar to Russian grammar. Plus the apostrophe ' in the Voynich manuscript comes in somewhat right place in the name of the palace.

Of course, all this can't be proven since exploring fence cipher in unknown language of 15th century leads to infinite possibilities for interpretation.

However, it is a nice story, especially since the first known owner of the what is called today The Voynich manuscript - Georg Baresch wrote in 1639:

"In fact, it is quite probable that some good man, interested in the true medical science (having realized that the common method of healing in Europe was not very effective) went to the oriental regions, where he acquired some Egyptian treasures of medicine, partly from books, partly also from discussions with the experts in this art, and that he took this information back with him, buried in this book with its characters."

So, how does Peter of Candia (pope Alexander V) fit into this Slavic language - Egyptian story?

Let's point to the fact that between 1350s when he went to Oxford (notably at Greyfriars as Roger Bacon did) and 1380s when he was lecturing at the University of Paris, Peter of Candia did missionary work in Russia and Lithuania (where he tutored the future King of Poland Jogaila).  It is safe to assume he had a decade or two of exposure to Slavic languages before he went to Paris. Add to this year or two in Prague around 1393 when he was working on Geangaleazo Visconti's Duke of Milan title - this is a lot of time spent in Slavic speaking environment.
As for his interest in Egypt and particularly Alexandria, I will make another post. For now, I will just draw attention to 15th century Ptolemy Maps manuscript held in the Royal library in Madrid.   The whole book is dedicated to Peter of Candia then Pope Alexander V with wonderful miniature on the first page depicting the Pope in a pyramid-like setting. 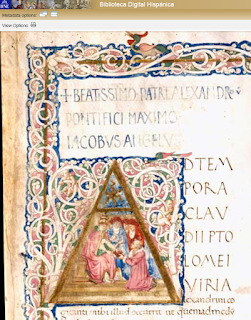 Posted by Ellie Velinska at 3:16 PM No comments:

The Voynich Manuscript: the Nymphs of Jean Duc de Berry

Voynich researcher Edith Sherwood,PhD first noticed similarities between illustrations of the VMS and Ovide Moralise, 1380s manuscript from Paris (Cod 742 of the Bibliotheque de Lyon - here). What she didn't notice is that the book belonged to the same Jean Duc de Berry, whose name pops up often in my VMS explorations. Plus in the early 1380s Peter of Candia was popular lecturer at the University of Paris where he received his Master of Theology title. So I decided to repeat Edith Sherwood's image comparison with better pictures now provided by the Lyon library here

More widely popular opinion among researchers is that the 'bathing section' is closer to images seen in Petrus of Ebulo, De Balneis Puteolanis (medieval version of porn, if you ask my opinion on it). These two ideas, however, can coexist together since some of the Voynich ladies may represent nymphs and other mythical creatures, some may be enjoying thermal baths. One of them may be representing both. In the late 14th century the thermal springs known today as Karlovy Vary (about 81 miles west of Prague) was discovered. One of the oldest springs in Karlsbad is called Rusalka (Mermaid)so I couldn't resist posting the creature both mythical and balneological - the fishtail woman on f79v of the Voynich Manuscript. 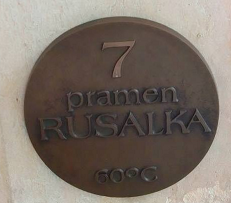 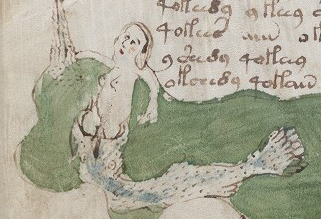 Posted by Ellie Velinska at 7:48 AM 4 comments:

Few years ago there were restoration activities at the Carrara Castle in Padua. Beautiful medieval wall decorations were revealed under the plaster of an old prison. Hidden for centuries, today those walls give us example of room decoration similar to one found in the Voynich Manuscript 'bathing' section. 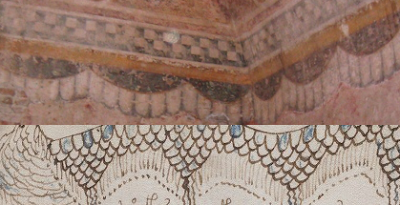 Posted by Ellie Velinska at 8:12 AM 2 comments: